Brought to you by Nuffnang and GT Radial Tyres

We spend a lot of time in the car these days. With footy and dance to playdates and birthday parties, life with three kids is often about driving them somewhere safely. Just a few months ago we settled on a 7-seater so that we can ferry not only our own three, but guests as well. That means I am thinking a lot about safety and entertainment on the road.

With two of my three prone to car sickness even driving a short distance in a straight line, all of our in-car games have to be free of reading, drawing or even looking down at anything. I finally had to put a moratorium on playing “I Spy” after playing it repeatedly for years… even though it had gotten better since the twins learned how to actually spell and they were old enough to grasp the concept that you really were supposed to “spy” the thing you wanted people to guess. Still, I was done with that game. Looking for new ideas, I have collaborated with my bestie,Ruth, who happens to also be Kieran’s grade one teacher this year, to come up with an extensive list of word and number games that can be played without anything special other than our imaginations! 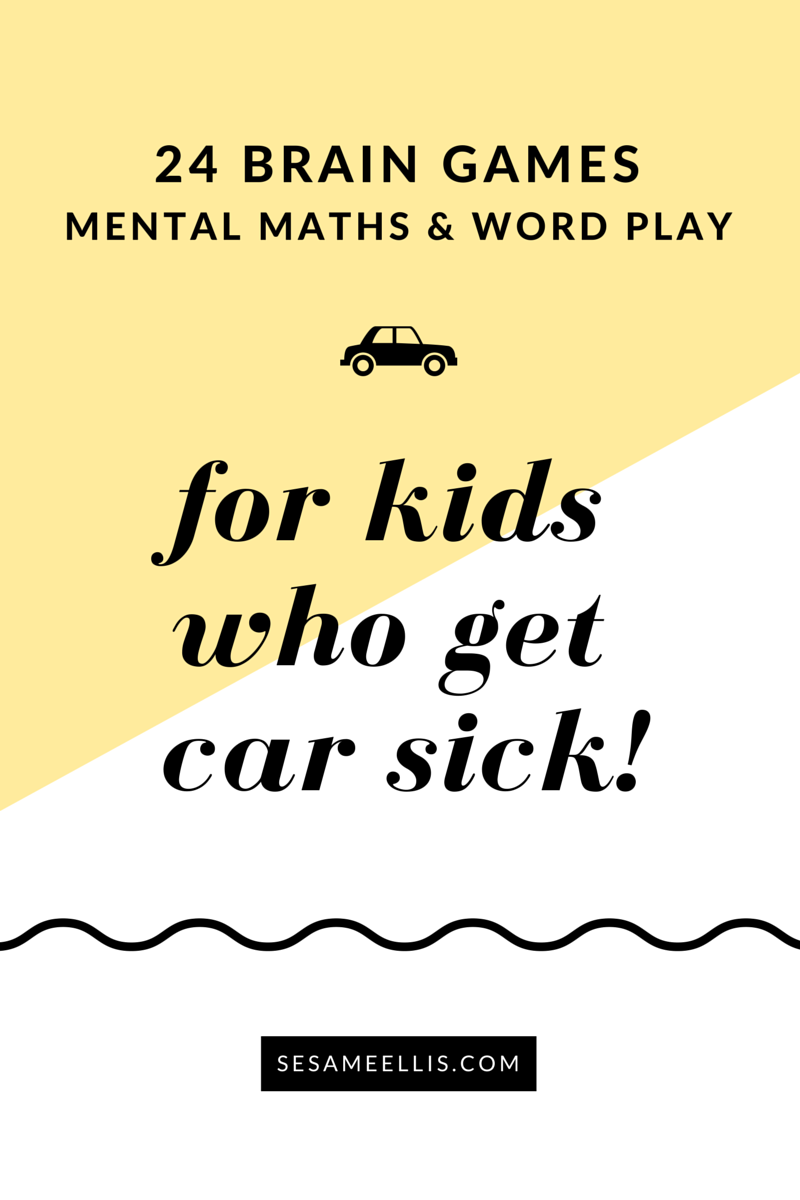 Licence Plate Sentences:
This is our current favourite game. We make up sentences or phrases from the letters on license plates we spot. Our car’s plate begins with YMY, so of course we say “Your Mom Yells!”

What/Who would…?
Another favourite in our car. I think up a question that has lots of answers like “Who would do their job at midnight?” and then we see who can come up with the most answers before we move on to the next question.

Never Ending Story:
We have been playing this with Gemma since she was small. You simply make a story one word or sentence each which the next person has to continue with their turn. I prefer sentences rather than words as it keeps the twins from being too silly.
Aides with Story structure.

Out of all the suggestions that my clever friend has offered, the following is my absolute favourite and I am going to play it with the kids as much as possible:

Create a Character:
Make up a character profile for the person in the car next to you. Who are they? Where might they be going today? What might their name, birthday or job be?
Encourages imagination and character creation.

Punch Buggy:
The classic car game! Create a list of actions for specific cars you see. We try to get them to not actually punch each other so we suggest they touch the roof when a VW is spotted!

Word Chain:
Make a word from the last letter of the word previously said, eg:  egg, giraffe, elephant.
This game aids spelling and particularly brings the silent “e” to the child’s attention.

Ten Questions:
Ask ten questions to guess a secret or magic number.
Am I odd? Do I have 3 digits? Answers must be yes or no.
Aides with number facts.

Animal, Mineral or Vegetable:
Similar to 20 questions but not with a number focus. Ask ten/twenty questions but answers must be yes or no only.
The focus is question development and children work on what makes a good question and therefore gives them more useful information.

A-Z:
A= (theme like girls names) Anna, Alice ect until you can’t think of any more than go to B: Betty, Bianca ect..
Aides with vocabulary, sound and letter relationships and alphabet recall and sequencing.

Two Truths One Lie:
Tell two truths and one lie (or untruth) and get others to guess which is which. Eg: I was born in March. Yesterday I read a book. Today a frog ate my sandwich.

Buzz: Many variations to this game. Count around by any chosen number, 1s, 2s, 5s…. Decide on a buzz number, say 7, when you count by 1s. Every time 7 comes up you yell buzz instead of the number but if you say the number you are out.
Aides with counting patterns and fluency.

Count ‘Em:
Really, just count anything you see out the window… birds, bins, blue cars! The list is endless. My kids are quite competitive so this will keep them going for a while just to be the one who counts the most!
Younger children can use their fingers to keep tally.

Start at A:
Begin by finding a word that begins with the letter A around you, maybe on a sign or a truck and say the word then move on to B.
Aides with alphabet recall and sequencing and reading.

Start at 1:
Begin with the number one and find it outside maybe on a billboard or in a sign, then move on to number 2.
Focus is on recognition of numbers in written and symbolic form and counting forward.

Tongue Twisters:
Making up tongue twisters and repeating them encourages rhythm and beat.
This highlights a different form of writing and its conventions.

Scavenger Hunt:
There are many variations available and you can make them up on cards ahead of time to help remember. For example, find a man walking a dog, find someone washing a car, spot a dog…

Spelling Bee:
This is very popular right now due to the Australian TV show. (I am terrible at this one!)
Aides spelling and mental recall of words.

Maths Sums:
Ask all kids at once or individually.
Great for encouraging mental maths and quick recall using a variety of strategies. Often used to help children with learning their times tables.

Short Songs: Songs that kids have loved for ages  as Bingo.  Kids use many of these at school and preschool so should have a large bank available to them. Terrific if they can be sung in rounds.

When you are finally losing your mind, you can simply play:

Rhubarb/ Grandma’s Undies:
Ask a question and answer with either term but do not laugh!

On a serious note, while entertainment is a major focus in the car, safety is my top priority. Now that we have a much bigger and heavier car than before, I want to ensure my tyres are the safest ones we can drive on. We purchased our car second hand and it will need new tyres shortly. After looking at the current research and reviews, we are considering GT Radial tyres for our big car. GT Radial tyres were tested by a leading Australian driver education organisation, Safe Drive Training, in a controlled wet braking test in May 2015. When braking from 100 kmph on a wet road, GT Radial tyres stopped 11 metres shorter, compared to a ‘budget’ tyre. GT Radial also stopped 1 metre shorter than a more expensive ‘premium’ tyre. With the amount of rain that Melbourne gets and the time we spend as a family in our car, skimping on tyres is not an option.

Keeping the kids safe and entertained is in my job description as a mother and I endeavour to do my best at that every day.